The Economic and Financial Crimes Commission, EFCC, Ibadan Zonal Office, on March 1, 2019 secured the conviction of one Akorede Hammed Olalekan before Justice P.I. Ajoku of the Federal High Court, sitting in Ibadan, Oyo State on a one-count charge bordering on impersonation, contrary to Section 22 (3) (a) of the Cyber Crimes (Prohibition, Prevention) Act, 2015 and punishable under Section 22(4) of same Act. 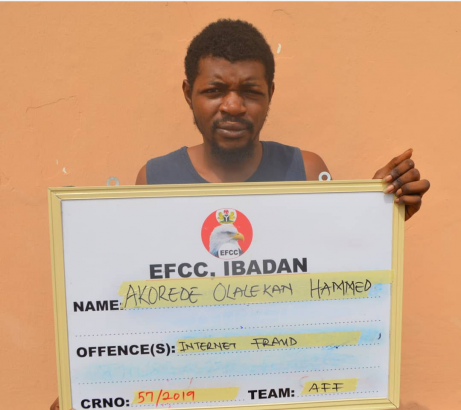 The convict who was earlier arraigned on January 1, 2018, had pleaded “Not guilty” but at the resumed hearing today, he opted for a plea bargain.

Prosecuting counsel, Ifeanyi  Agwu, thus prayed the court to convict him accordingly.
Consequently, Justice Ajoku convicted and sentenced him to five months in prison to take effect from the date of his arrest. The convict was also ordered to forfeit his Samsung S7 phones to the Federal Government of Nigeria being part of the proceeds of his fraudulent act.

The count charge preferred against him reads:

“That you, AKOREDE HAMMED OLALEKAN sometimes in January, 2019, in Ibadan, Oyo State within the jurisdiction of this Honourable Court did fraudulently impersonated one Scotia Bank to one Sandy Wilkins with intent to gain advantage for yourself and thereby committed an offence contrary to section 22 (3) (a) of the Cybercrimes (Prohibition, Prevention, etc) Act, 2015 and punishable under section 22(4) of the said Act”.