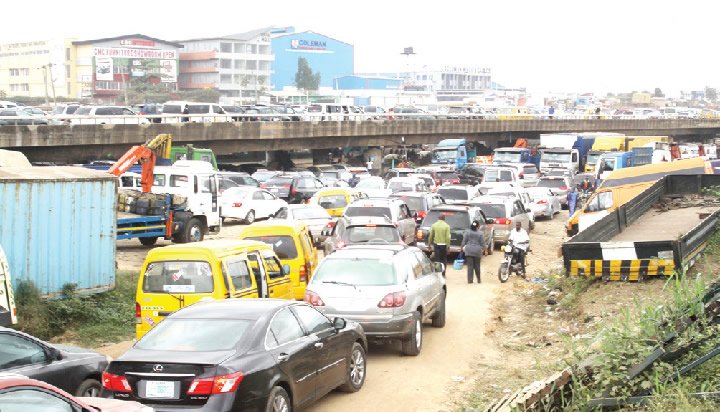 Travellers on the Lagos-Ibadan Expressway spent many hours in traffic on Sunday as both sides of the road were blocked.

The traffic was said to have been caused by the ongoing reconstruction of the road and the just concluded convention of the Redeemed Christian Church of God.

Motorists from Arepo community, Ogun State, who were trying to access the expressway, were unable to do so as traffic was at a standstill.

Also, road users trying to avoid the traffic by following an alternative route under the Longbridge inward Ogun, were stuck.

Our correspondents noted around 1pm that the traffic stretched from Berger, Lagos State, to Magboro, Ogun State, on both sides of the expressway.

Around 5pm, two vehicles avoiding the blocked expressway collided at the Wire and Cable Road, Arepo, as the drivers engaged in an argument.

One of our correspondents overheard the driver of a Sienna bus accusing a commercial bus driver of damaging his vehicle while trying to manoeuvre the road.

He said, “I don’t want apology or money. I only want him to repair my car.”

The commercial bus driver, however, denied any wrongdoing.

The argument attracted a crowd, which worsened the traffic on the road.

One of our reporters also observed another accident that occurred near Arepo Junction, as a commercial bus driver on one way rammed into a Toyota Sienna.

Policemen and officials of the Federal Road Safety Corps gave the bus driver a hot chase before apprehending him for causing the accident.

It was gathered that the RCCG just concluded its 70th annual convention, tagged, ‘Perfect Jubilee,’ which began on Monday, August 8, and ended on Sunday, August 14.

Members returning to their various destinations were said to have increased the traffic flow on the road.

A churchgoer, who identified himself only as Oluwatimileyin for personal reasons, said he was frustrated by the gridlock.

He said, “I went to my friend’s church for a celebration and I’m already tired. I thought I’d be home early to rest before resuming tomorrow (Monday). But this traffic is making my day worse.”

A passenger, Ayobami Ismail, told our correspondent that the cost of transportation increased due to the traffic.

He said, “Drivers don’t want to go to Berger again. Those that go there are using it to exploit us.”

Another passenger, who identified herself only as Mariam for security reasons, said, “I am going to visit a sick family member. This traffic is making things difficult. I don’t like travelling at night but I don’t know when I’ll reach there or return home.”

The supervisor in charge of the Lagos-Sagamu section of the expressway, Wale Adebote, said the large number of people returning from the RCCG Redemption Camp contributed to the traffic.

He said, “Usually, the road is light but Redeemed just finished their programme today (Sunday). Also, some people are returning to their places of work and the road is a bit narrow due to the construction.”

The spokesperson for the FRSC, Ogun State, Florence Okpe, said officials of the agency were handling the situation.

Okpe said, “You see, the traffic is because of that construction work. The moment they narrowed the road for construction, traffic became high. We are aware and our men from Ojodu-Berger are at OPIC controlling it. It has been like that since Friday. The traffic started from Redemption Camp to Mountain of Fire and Miracles Ministries. I can imagine the difficulty motorists face trying to enter Redemption Camp because of the activities.”

The state Police Public Relations Officer, SP Abimbola Oyeyemi, said policemen had also been deployed to ensure hoodlums did not take advantage of the traffic to rob commuters.

He said, “The Commissioner of Police was at the Longbridge to have an on-the-spot assessment of the area.  Necessary steps have been taken.

“One of the steps includes putting a stop to hawking on the expressway because we discovered that some of those hoodlums always pretend to be hawking goods in the traffic while using the opportunity to perpetrate crime.

“So, we have asked them (hawkers) to vacate the place; a 24-hour surveillance patrol has been deployed and some tactical teams have been moved to that place. We have a very good security arrangement in that place.”

The Head of Media and Public Relations, RCCG, Pastor Olaitan Olubiyi, said the church’s convention ended on Saturday and could not have contributed to the gridlock.

He said, “That’s not the first time there will be traffic on the expressway even when the church doesn’t have a programme. The major programme ended yesterday (Saturday) and the service today (Sunday) ended in the morning. So, it cannot be the cause of the traffic on the expressway. Why must they now think it is because the church had a convention?” 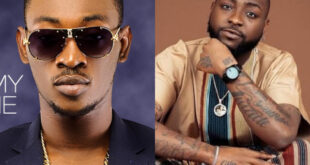