“I slept with her during deliverance session to exorcise spirit of death from her” – Pastor who impregnated ’12-year-old’ girl speaks; victim’s mother pleads for his release

A Pastor, Michael Abiodun Rabiu, who was arrested for defiling and impregnating the teenage daughter of his church member, has narrated how he carried out the act.

It was earlier reported that the victim’s mother joined the church because of a spiritual problem that had claimed the lives of two of her daughters.

To prevent the victim from facing the same fate, she took her to the pastor’s church for deliverance. However, he had carnal knowledge of her and threatened her with dire consequences if she reported him to anyone.

She fell pregnant in the process but it was not detected until she was seven months pregnant. She delivered the baby three months ago. 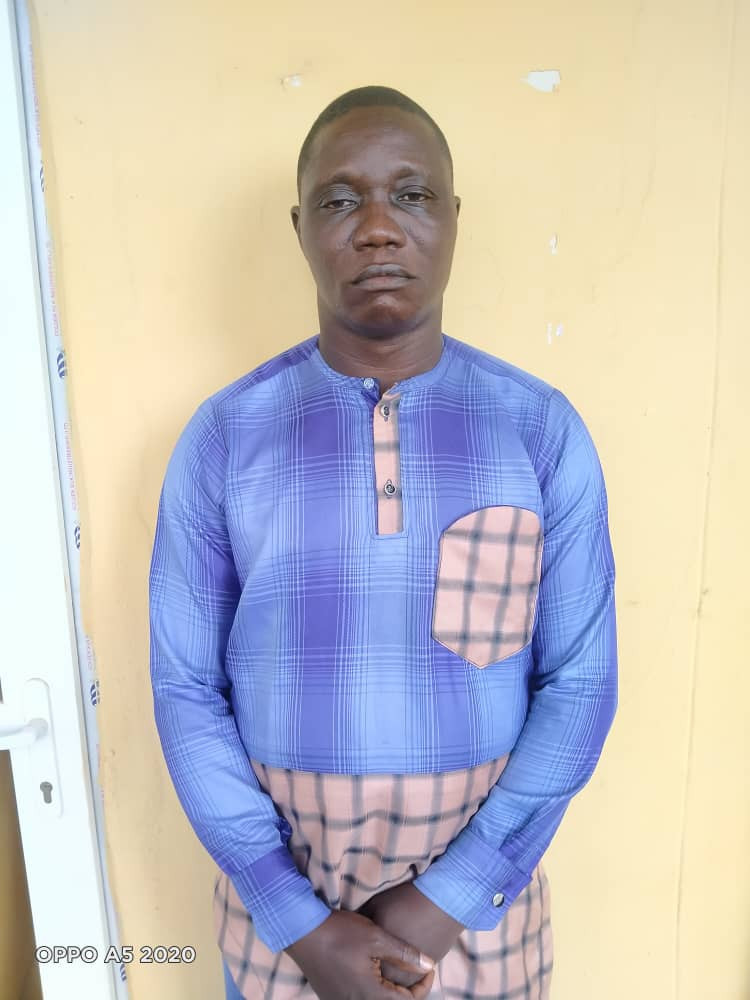 Upon interrogation, Pastor Michael, who is a father of three, confessed to the crime and blamed it on the devil.

“I’m from Ikorodu, Lagos State, but I have been in Owode Egba, Ogun State, for 13 years. I’m married and have three children – two by my first wife and one by my new wife. I am a deliverance pastor and the founder of the church I am in charge of. I started the deliverance ministry about 13 years ago but had been in the calling about 25 years ago.

“In the girl’s lineage, there is a god call ‘tánràn’. It is a snake god. The god had already taken some children born before her, so that was what brought her and her mother to me for deliverance.

“I had noticed that the spell was about manifesting in the girl’s life as issues about death were always discussed with her.

“When she was brought to me, I advised her mother to quickly take care of her spiritually so that she would not lose her too. I asked the girl to come for deliverance for seven weeks, and she started coming every Wednesday after closing from school.

“About a week to the end of the deliverance sessions, when we finished prayers for the day, I don’t know how the devil came over to make me have sexual relationship with her.

“I told her that I wanted to marry her so that the spell on her family would not come upon her. I also told her that I would help to sponsor her education. She said there was no problem. I knew that if I didn’t tell her that, she would not agree to have sex with me

“She is a young girl and I discovered her to be a virgin so I could not penetrate her easily, I got stuck on the way but I ejaculated in her. She left thereafter and continued as a member of the church choir.

“I discovered a change in her at about six months after. I didn’t give her any drug to take but I was so afraid of telling her mother. At that time, her mother noticed her swollen stomach and thought it was the spell that was at work in her. This was because those of her late siblings used to swell up before their deaths.

“This made her mother to take her for ultrasound scan where it was discovered that she was seven months pregnant. Her mother brought the issue to me and I confessed to her that I was responsible for the pregnancy. I started taking care of her until she had natural delivery of a baby boy (name withheld).

“By then, many people had known in the town. I also told my wife and she accepted it as a cross she has to bear. She did not quarrel with me.

The pastor, who expressed regret at his action, said he has contemplated committed suicide because his action was very shameful.

“I’ve almost gone paralysed in my arms and legs. I thought of the girl’s age and turning God’s name into mockery and felt so ashamed,” he said.

The victim’s mother, who spoke in an interview with Nigerian Tribune, said she doesn’t want to pursue the case because the suspect has been taking care of her daughter since they knew about the pregnancy.

“I have been attending the pastor’s church since 12 years ago. And he likes me and my family. He stood by me in times of tribulation. I know what happened is the work of the devil. I have lost two children to strange deaths, as they would swell up and die within a month of being sick.

“About seven months after the prayers, I noticed that she looked swollen as it used to happen to her late sisters. I was afraid that the same thing had befallen my daughter, so I took her to a hospital. It was there I was told that she was pregnant

“I asked her about the person who impregnated her and she replied that it was the pastor. I went to meet him and he admitted that he was the one. Since he did not deny the ownership, all I was thinking of was to support my daughter throughout the period so that she would have safe delivery.

“Since the pregnancy was detected through the scan, the pastor has done all necessary for my daughter’s ante natal clinic attendance and preparations towards her delivery. He bought everything needed and took care of her financially

“Since her delivery too, he has been taking care of her and the baby. And he has also changed her school and paid her school fees where she is now. I have accepted what has happened as destiny. I’m not ready to make any case with him. I was not the one who reported him to the police, neither was it my daughter.”

She pleaded for the pastor to be pardoned and released from police custody, and said,

“There is no one to help me take care of my daughter and her baby except the pastor, which he has been doing very well.

“I’m 47 years old, a widow and with no parents. I sell bread and don’t make N500 gain in a day. How do we survive without him? At this time, there is no one to sponsor my child’s education. There is no one to help me.”

Speaking with Nigerian Tribune, the victim said she never said the pastor forced himself on her and pleaded for the father of her son to be released.

“He told my mother that I should come to church for deliverance prayer. We had been going through the sessions for weeks when, after prayers one day, he asked me to go to the parlour, remove my dress and lie down,” she explained.

“That was when he slept with me. He pleaded with me not to scream in pain when he noticed that I was a virgin. I didn’t know I was pregnant because I had not menstruated before the sex.”

Previous “The way she went from a sugar mummy to a side chick needs to be studied” – Netizens still in awe over actress, Eniola Badmus’ transformation as she releases new photos
Next Drama as LAUTECH graduate visits school to return his certificate and get a refund of his fees because he’s suffering (video)