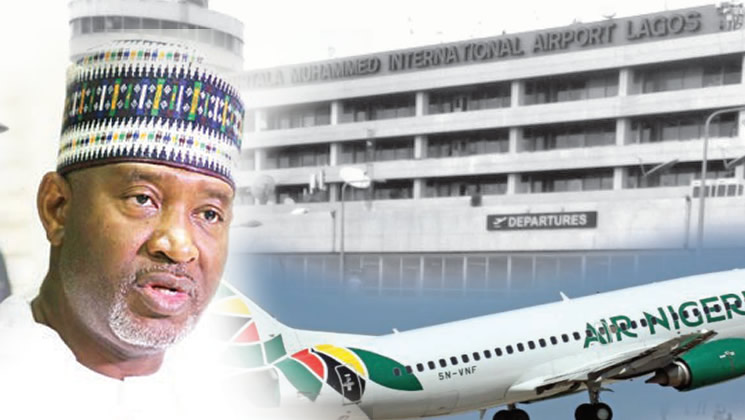 The Federal Government on Wednesday apologised to air travellers over the industrial action of the National Union of Air Transport Employees, the Air Transport Services Senior Staff Association of Nigeria, which halted inbound and outbound flight operations on Monday.

It also vowed to enforce the section of the Civil Aviation Act (2022), disallowing employees from embarking on flight-crippling strikes in the future.

“First, we apologise to our teeming passengers in this difficult moment. There are other ways of channeling issues when they arise but they are not permitted to go on strike because aviation is an essential service,” the Minister of Aviation, Hadi Sirika, told State House Correspondents after exiting the Council Chambers on Wednesday.

On Monday, local and international flights were disrupted for several hours as workers under the Nigerian Aviation Handling Company declared a warning strike over poor pay.

Earlier, the aggrieved employees had issued a five-day strike notice to the NAHCO management.

They requested, among other things, 100 per cent increment in pay following the general upward review of ground handling changes in the sector.

According to reports by The PUNCH, the NAHCO management had approached the court to prevent the looming industrial action.

Nonetheless, the workers withdrew their services by 12:00 am Monday, leaving hundreds of air travellers and airlines in limbo.

At the Murtala Muhammed International Airport, Lagos, all foreign airlines on the morning schedule were affected.

Some of them include RwandAir, Qatar Airlines and Royal Air Maroc; with some diverting flights to neighbouring countries or returning passengers to base.

Fielding questions from State House Correspondents at the Presidential Villa, Sirika described the industrial action as “wrong, inhumane and against the law”.

He vowed to enforce the relevant sections of the Civil Aviation Act 2022 to prevent future disruptions.

According to Sirika, the piece of legislation prohibits industrial action and riots of such scale in the aviation sector.

“This is very important to the travelling public. First, we apologise to them; our teeming passengers in this difficult moment.

“Second, this will not happen in the future by the grace of God. And the reason is simple; aviation is an essential service. The Act has been assented to by Mr. President, so strikes and riots around our airports are prohibited by the laws of the land.

“Now that we have the Act in place and assented to by Mr President and passed by the National Assembly, we will deal with it according to the law,” he said.

Describing aviation as an essential service, the minister argued that the striking workers had other less-disruptive avenues to voice their grievances.

He said, “We will ensure no essential service is being disrupted by anybody no matter how aggrieved. There are other channels of channeling issues when they arise but they are not permitted to go on strike because aviation is an essential service and is by the law of the land now.

“I will give you an example, there was an airline that had to return to base because it couldn’t land. Imagine if there was a patient on that aircraft. Imagine somebody attending to a very serious issue or matter at hand or business or a student trying to catch up with an exam and then because of somebody who is aggrieved some other person will die.

“Government will no longer allow that. So it’s in the law of the land, check the Civil Aviation Act, it’s been assented to and it’s going to take place soon, in fact now, from today we will not allow that.

“As a government, our ears are always open, the government is open to listening to any grievances and there are procedures for dealing with this kind of grievances. They should please desist from this. It is wrong. It is inhumane. It is not allowed. It is not permitted and we will not be permitted any longer.”

• As IGP Tasks Officers to be Professional,